Ship Bottom remains the premier spot in NJ for quiet relaxation by the ocean. Since it is only a quarter mile wide, visitors are close to both the sea and the bay.

Situated about 4- 6 miles out from the mainland, Ship Bottom is an 18-mile long Barrier Island that was happened upon by Captain Cornelius Jacobsen Mey in 1614. As Captain Mey sailed the Northern end of Ship Bottom, he noted very rough tides through the northern inlet. He named the inlet "Barenegat", which means "Inlet of the Breakers". This name has since been Anglicized to "Barnegat". Because of the length of the island and the lovely beaches, island has been called Long Beach Island for the last several hundred years.

The tides of Ship Bottom were so strong that even today, the coast is dotted with many shipwrecks. A lighthouse was constructed in 1835, but its proximity to the water combined with storms and erosion caused it to fall into the sea in 1855. A new lighthouse at Barnegat, "Old Barney" as it is locally known, was constructed in 1859 and is still standing today. In the summer months, visitors can climb to the top for a vantage view of the island and further. 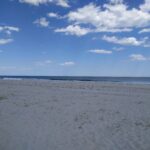 Back before there were roads, the only way to visit Ship Bottom was by boat. In 1886, a railway was constructed across the bay, which was subsequently destroyed by a storm. Today visitors without a boat can drive the causeway over Barnegat Bay to reach Ship Bottom. There is no public transportation to Ship Bottom.

Although Ship Bottom has over twenty separate communities, there are only about 20,000 year round residents. Both Ship Bottom and Barnegat Light were developed as resort towns, other areas remained simply a place to relax and enjoy the ocean.

Ship Bottom remains the premier spot in NJ for quiet relaxation by the ocean. Since it is only a quarter mile wide, visitors are close to both the sea and the bay. Only one town on the island has an amusement area, and there is no boardwalk. Ship Bottom boasts some of the most naturally beautiful beaches on the east coast, as well as hundreds of boutiques and fine restaurants and lots of fun activities and great fishing!

We have local offices and sales associates ready to help you buy, sell or invest.

Ready to stay? Search properties to find your home on the Jersey Shore.

What Others Say About Us

Visit one of our conveniently located offices